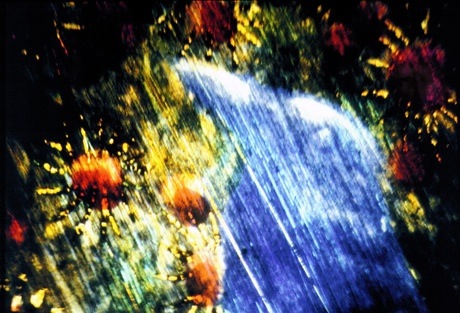 Unknown Woman is in the PoetryFilm Archive and has been screened at a number of events including PoetryFilm at Tate Britain and PoetryFilm at Curzon Soho. The film traces a woman’s psychological journey using a mixture of drawn animation, stop-motion and live-action footage; the film originated from dreams of a woman and a crow in which the two beings shared one sentience.

“The man looks the world full in the face, as if it were made for his uses and fashioned to his liking.

The woman takes a sidelong glance at it, full of subtlety, even of suspicion.”

The below copy is taken from the artist’s website.

“A small grant enabled me to film some experimental performance to camera, and to begin development of a non/narrative stream through the ‘automatic drawing’ of 2-D animation sequences. I drew as much as I remembered of my dream, and made a giant crow mask with a theatrical props-maker, using a stuffed bird for reference, lent to me by Kelvin Boot, then the natural history curator at the Royal Devon and Exeter Museum. The bird was actually a rook: the corvid closest to a crow in the musem collection, but I was able to photograph it from all angles, and study the weave of its feathers.

As I became immersed in this intuitive film-making process, further ‘sidelong’ dreams led me to the locations which feature in the film: the seashore at Dawlish Warren, the secret bluebell wood in east Devon, Haytor on Dartmoor, and, finally, the sea itself in Plymouth Sound: each of these places is resonant with my ‘sidelong glance’ and interior sense of place in the world.” – Kayla Parker

Unknown Woman is the first of a group of three 16mm films which explore interior female landscape from a personal perspective – Cage of Flame (1992) is the second, Walking Out (2000) the third.