I am delighted that two of my artworks, the concrete poem Full Stop, and the Morse Code sound transmission of the same text, have been selected for inclusion in Tate Britain’s RadioCity exhibition, a special season of radio, sound art, performance and broadcast. The printed text will be displayed, and both the text and the Morse Code audio will be broadcast through the radio channels at Tate Britain, on Saturday 24 and Sunday 25 January 2015, 10am-6pm. Look and listen out for it if you visit Tate Britain today.

Thanks to Thomas Zandegiacomo Del Bel at Zebra for the heads-up.

“No mistake in the system”

END_OF_DOCUMENT_TOKEN_TO_BE_REPLACED

Here is documentation of my Artist Residency in Husavik on the north coast of Iceland, where I lived in January and February 2015.

The Artist-in-Residence Exhibition PV took place on Thursday 12 February 2015. For the exhibition, I exhibited the following:

Aural (exhibited in the fridge space, in darkness)

The Door to the FFFFF

Setting up my sound installation inside the fantastic former fishermen’s fish fridge. 12 February 2015. 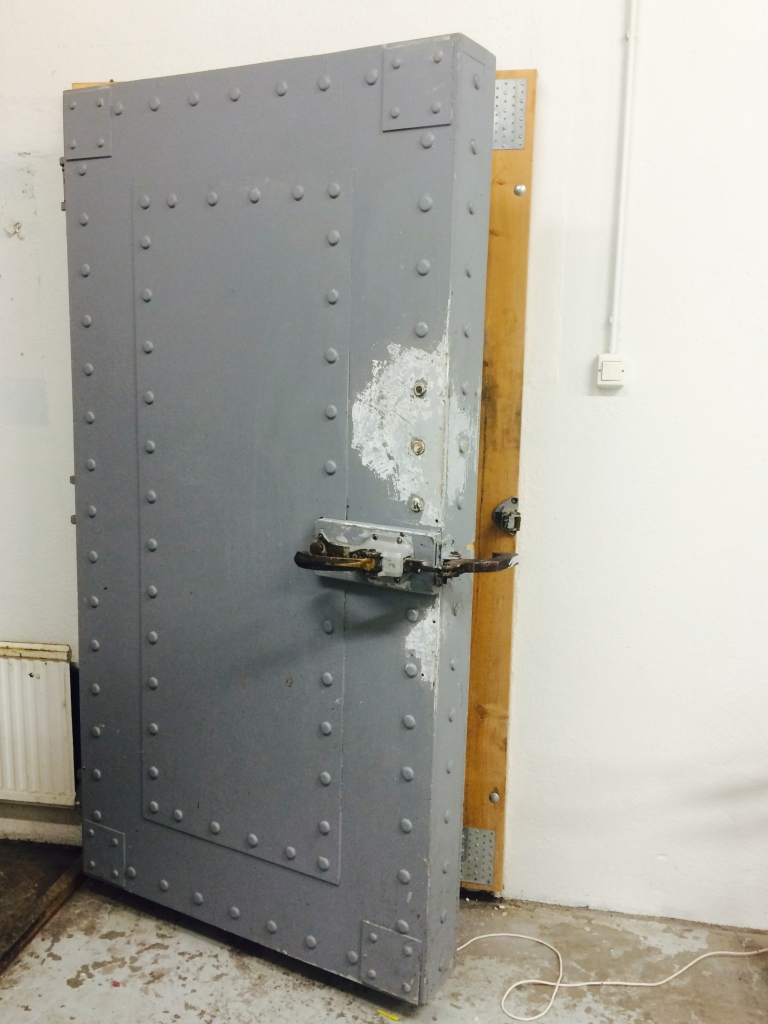 Here I am recording the sound of Dettifoss Waterfall, “Europe’s most powerful waterfall”. It sounded like roaring TV snow. 11 February 2015.

Icicles on the Cliff of Husavik Beach

I climbed down the cliff to take these pictures. The climb back up was hard as my rucksack contained jamjars full of black sand, so it was difficult to balance. The spiky crampons on my snowboots were vital. 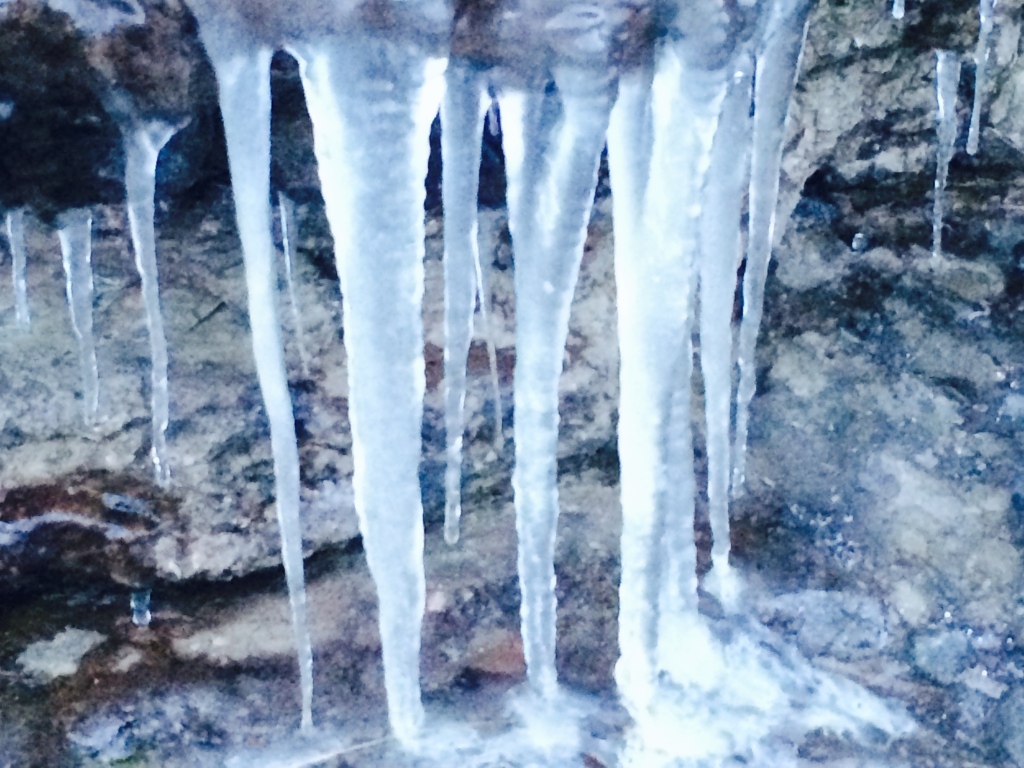 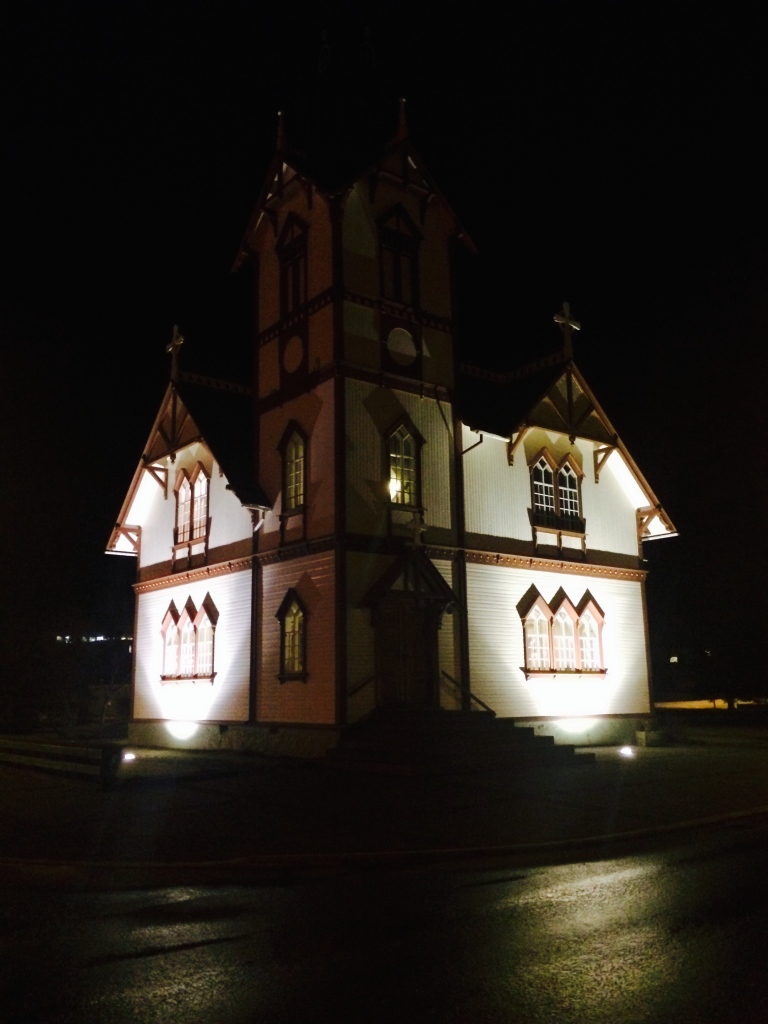 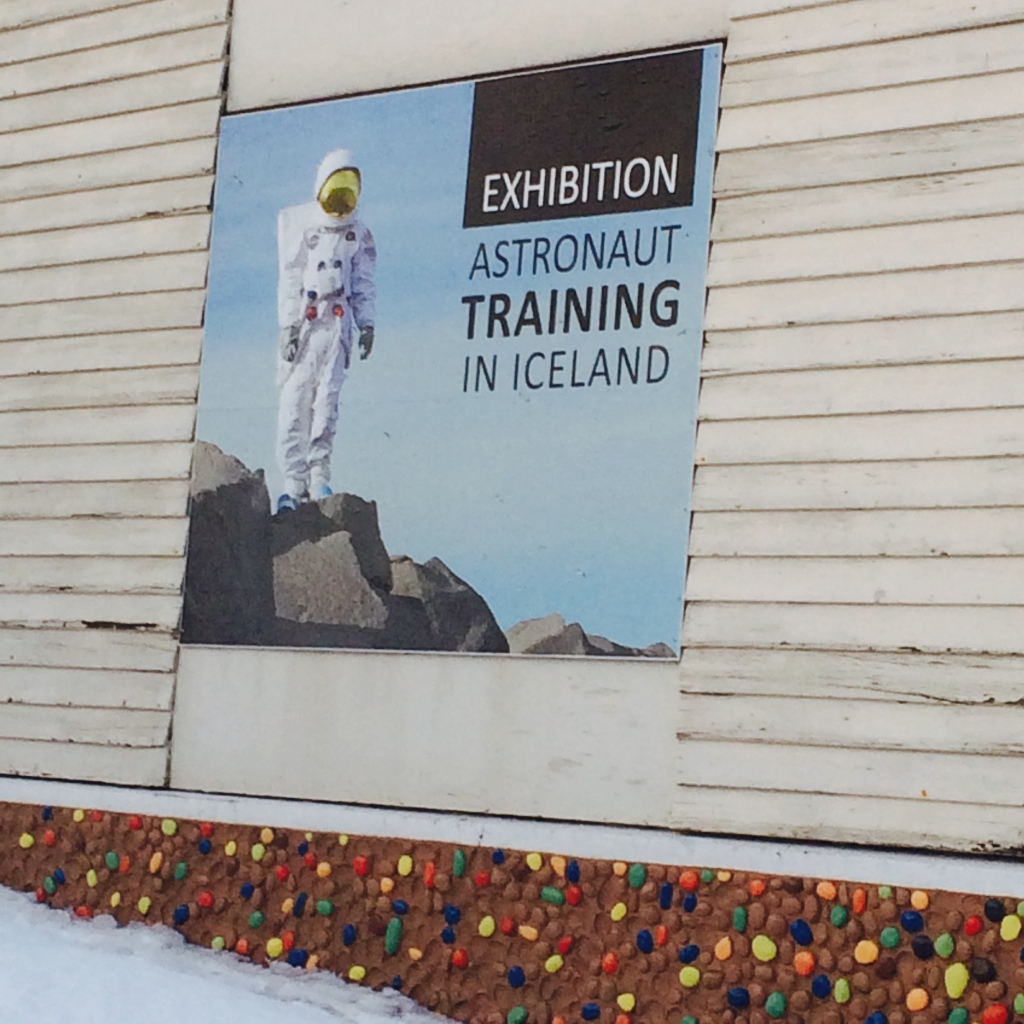 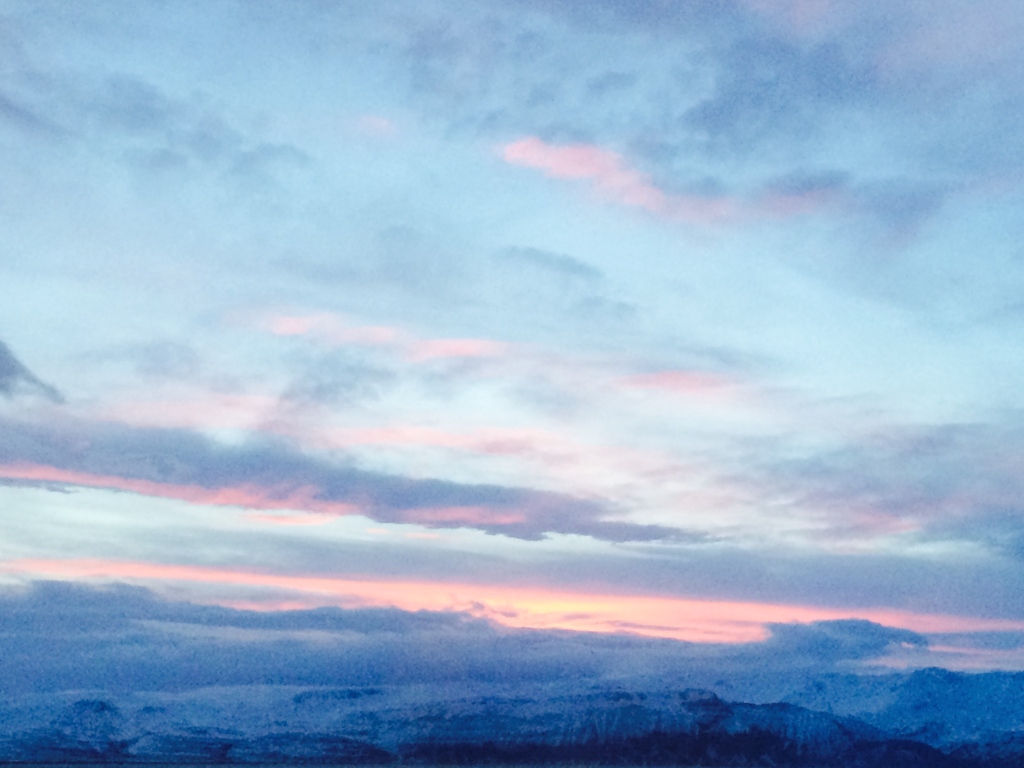 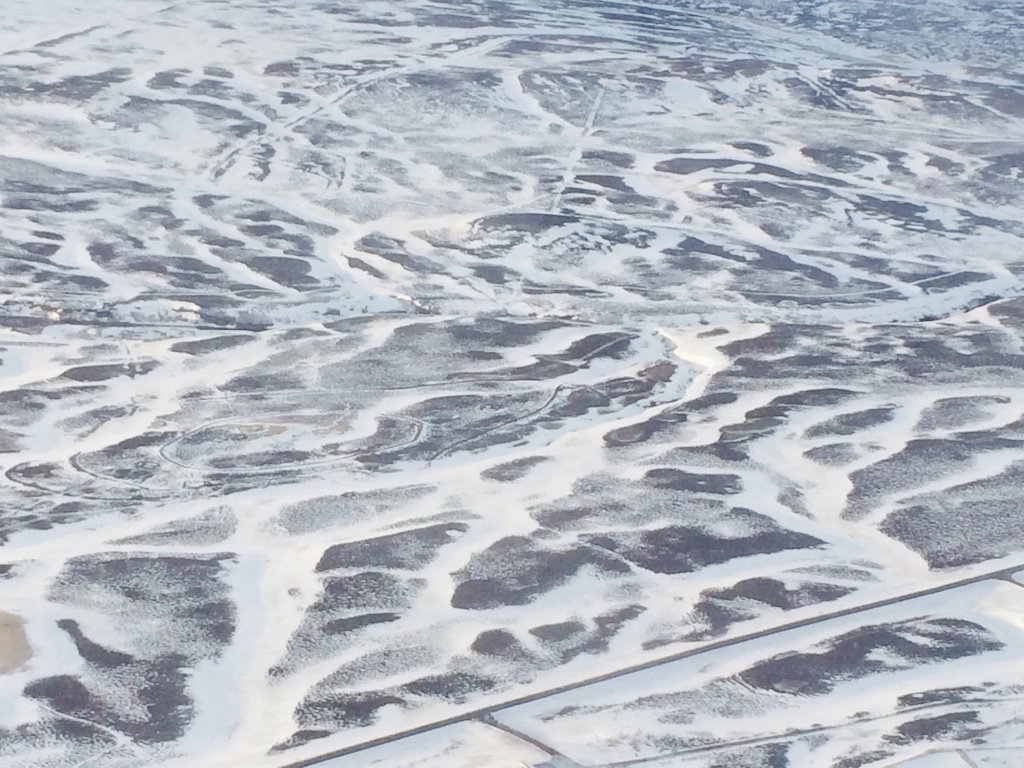 About to board The Eagle for the domestic flight from Reykjavik to Husavik.

Domestic flights were all cancelled on Friday 6 February due to bad weather, so I checked into a hotel next to the airport. The hotel happened to have a range of themed “Poet Rooms”, each dedicated to an Icelandic poet. 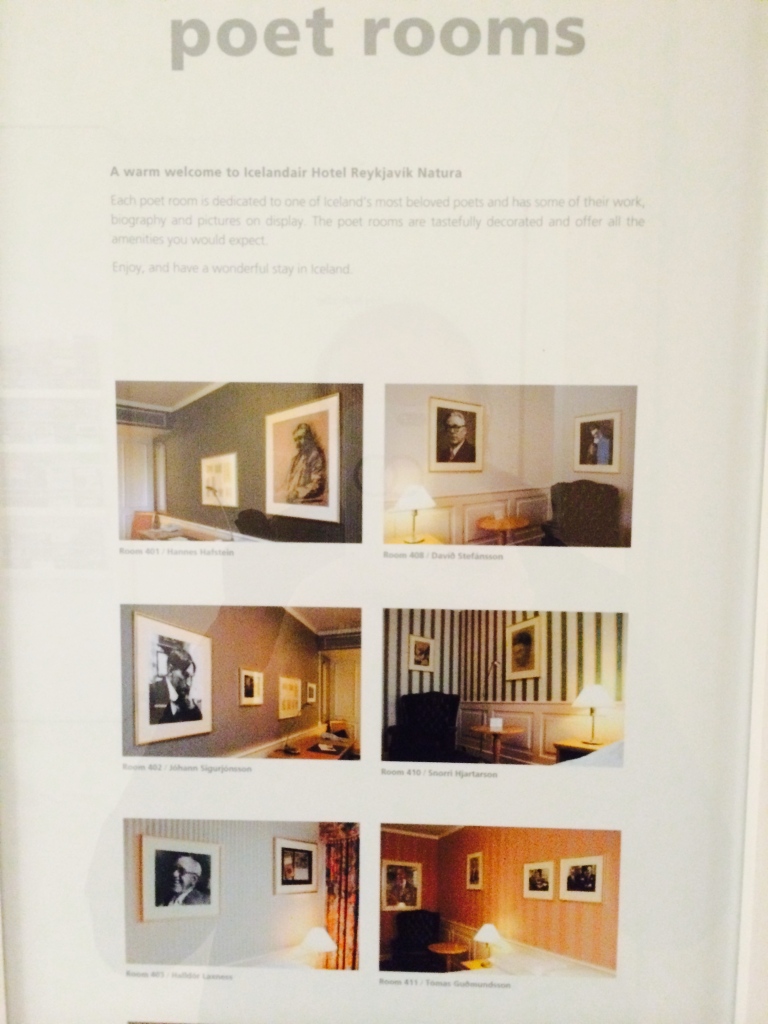 The hotel also happened to have a large taxidermy menagerie. 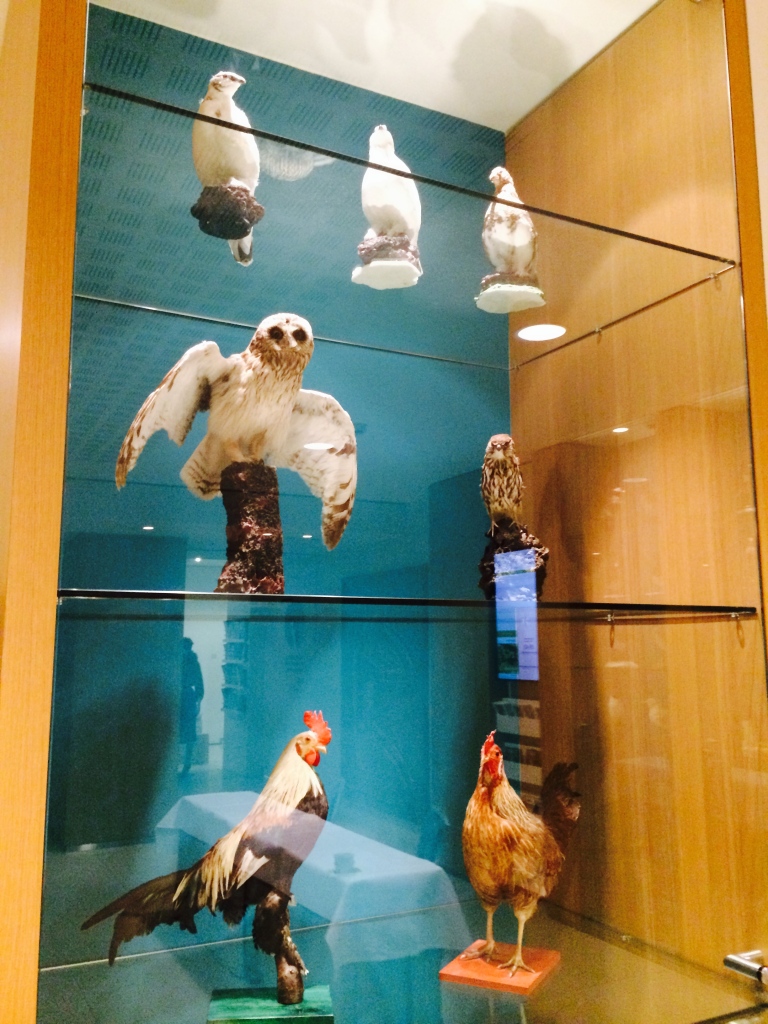 Plan from the Plane

“It’s a pity we don’t whistle at one another,

like birds. Words are misleading”   – Halldor Laxness, Under The Glacier

Photographed at Klafavik Airport on 4 February 2015, on my way to travel to FACT Liverpool to give my presentation at the Send & Receive symposium about Poetry, Film and Technology in the 21st Century. These words resonated with some of the themes raised at the symposium. 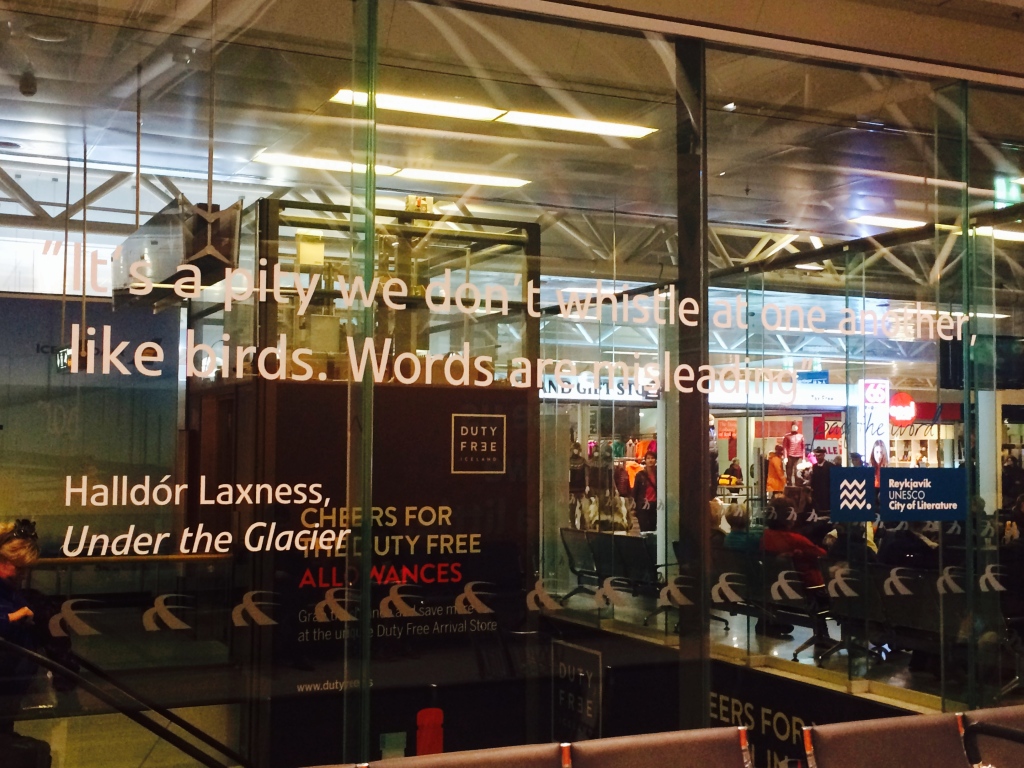 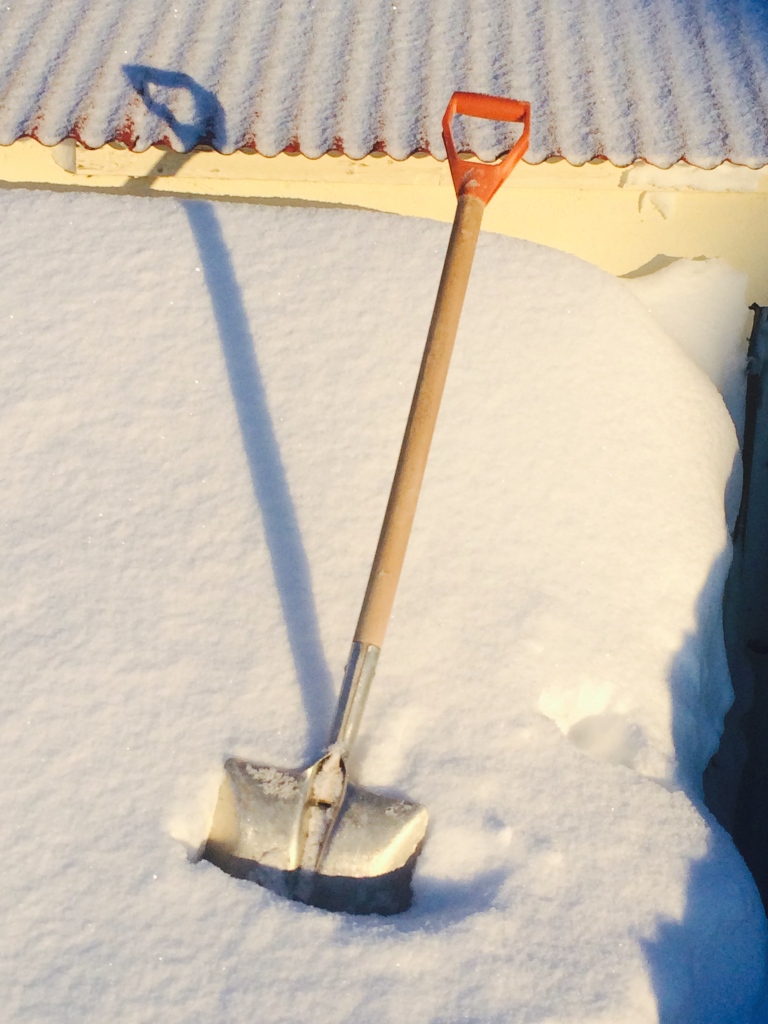 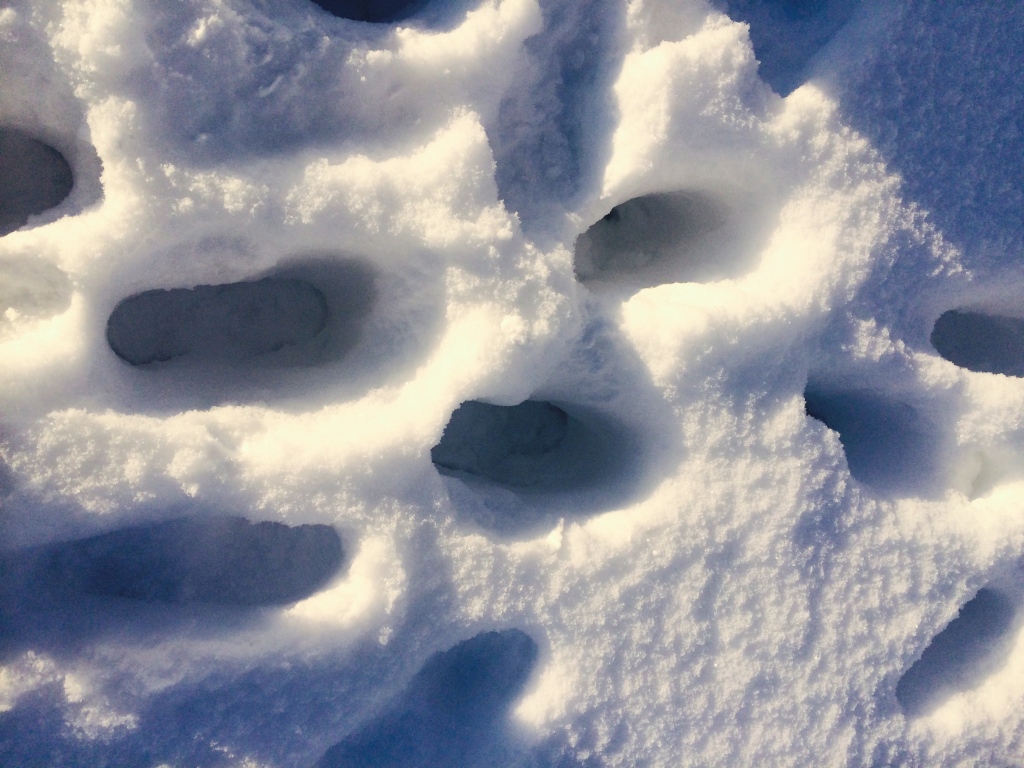 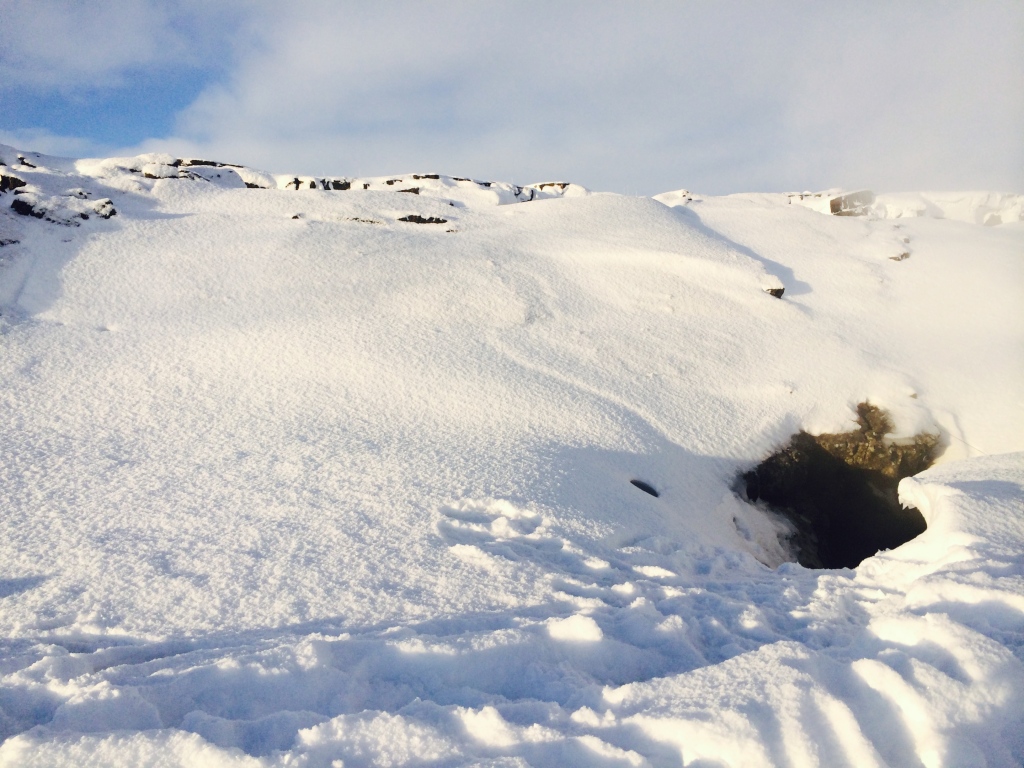 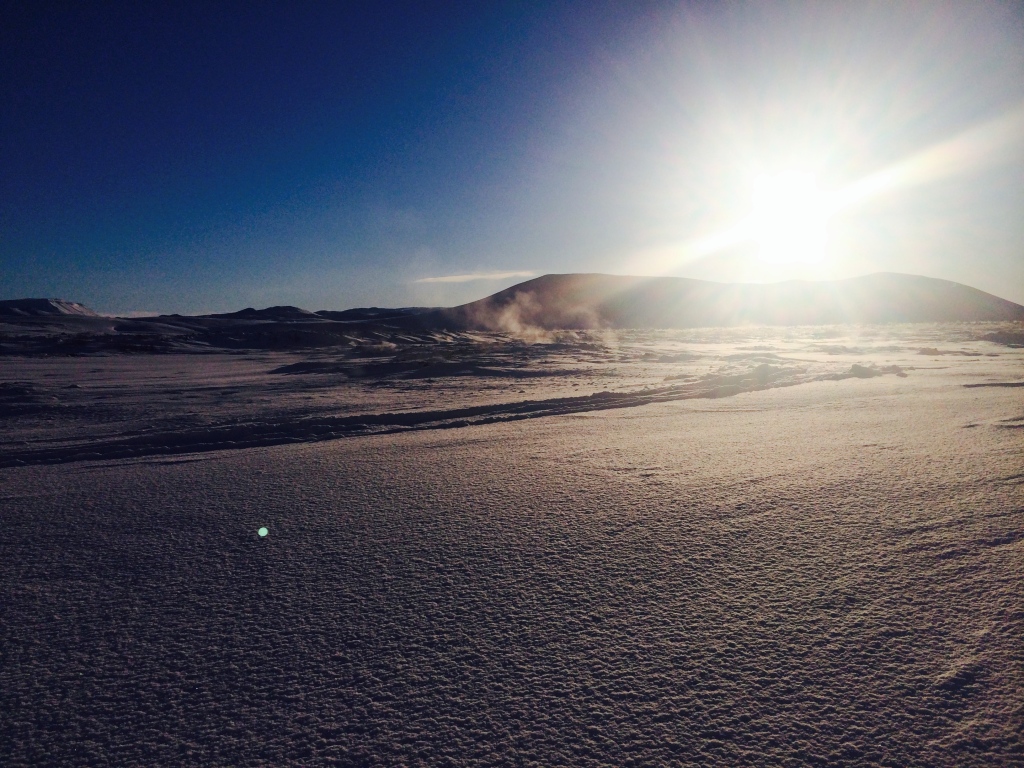 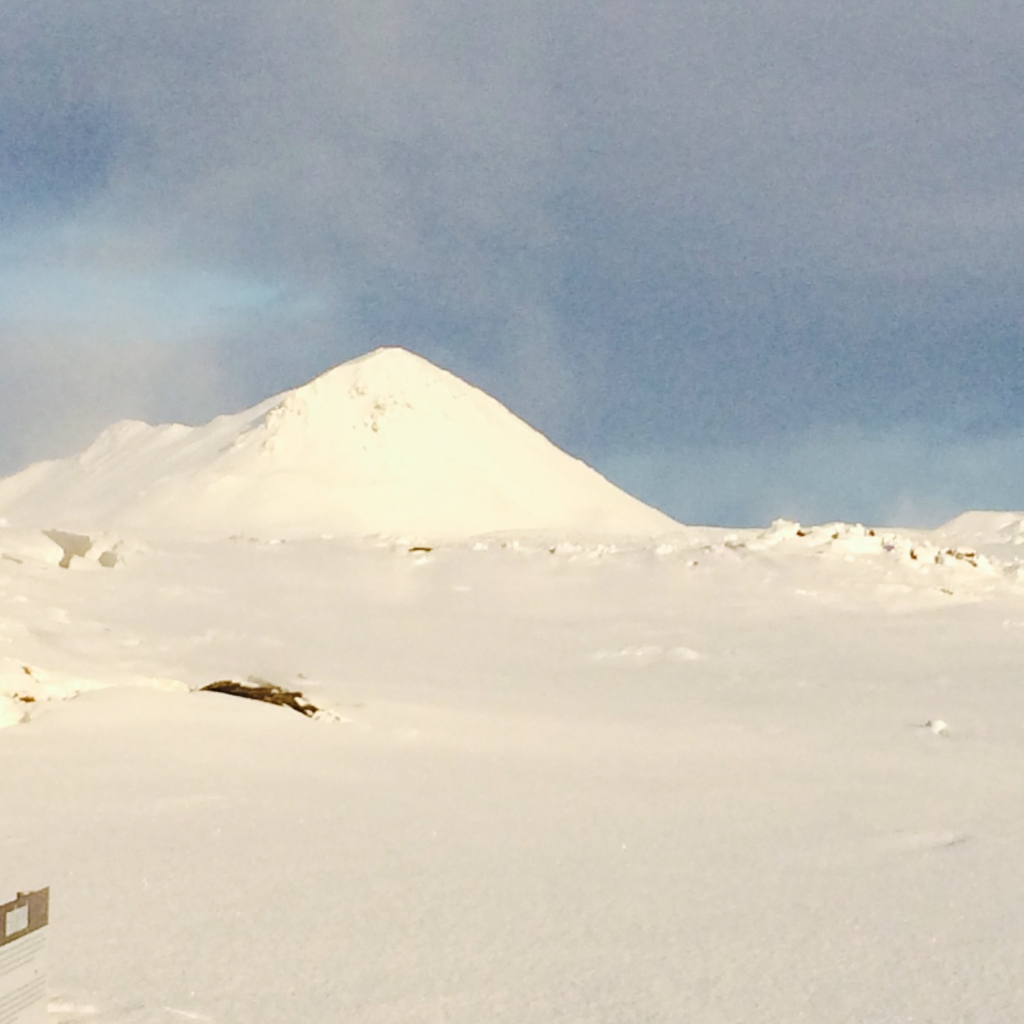 These rocks were formed by lava, and this extraordinary example has a hole through the middle. 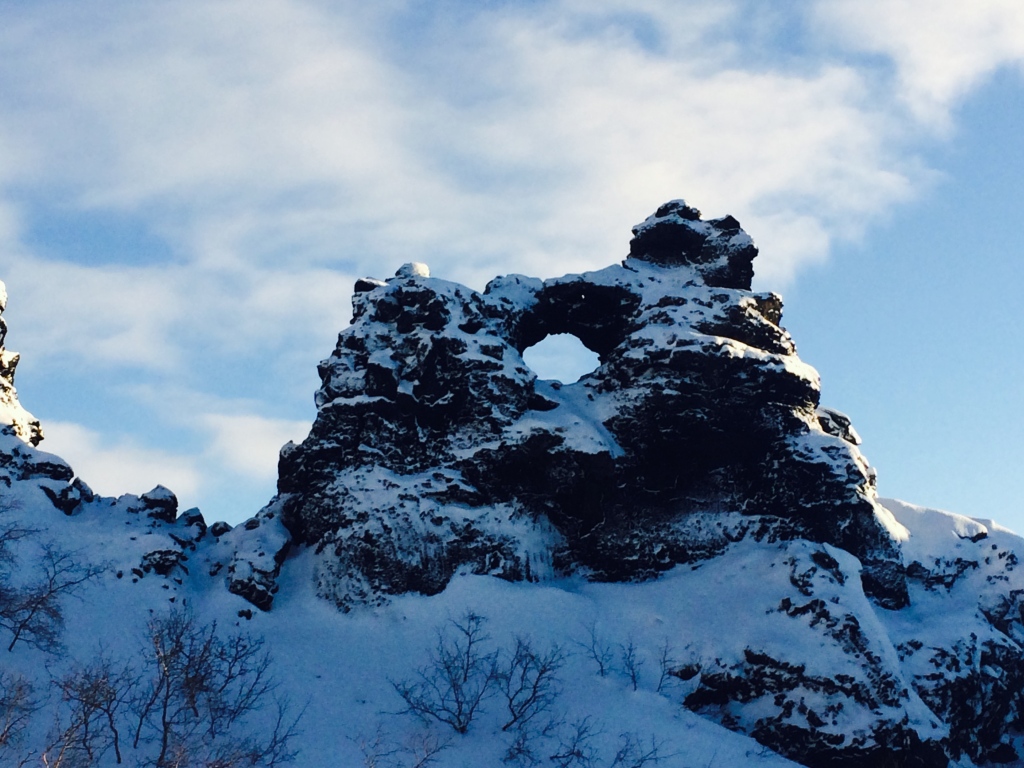 I thought it was a bit windy today, then I realised that the Icelandic Meteorological Office had issued a Weather Warning:  “Strong gale warning (more than 20 m/s) is expected widely until after midnight, and even whole gale (more than 24 m/s) in some places.” A whole gale is number 10 on the Beaufort Scale, and 12 (the maximum number on the scale) is a hurricane. Here is today’s wind map:

Here is a picture of a portion of sperm whale in a packet, sadly on sale in the local supermarket at the fish counter.

A delicacy in Iceland is pickled shark. It contains 17g of protein and 36g of fat per 100g.

This is the Husavik spa hidden in a top secret location on a mountain. This geo-thermal spa is made of a former cheese tub tin that was used for making large quantities of yoghurt/cheese. After trekking back from the frosty black-sand beach, I had a hot dip before continuing my journey home in the snow. Highly recommended.

This reminds me of Tarkovsky circa Stalker. The geo-thermal cheese tin hot tub is to the right, out of view and in the middle of this extraordinary landscape. 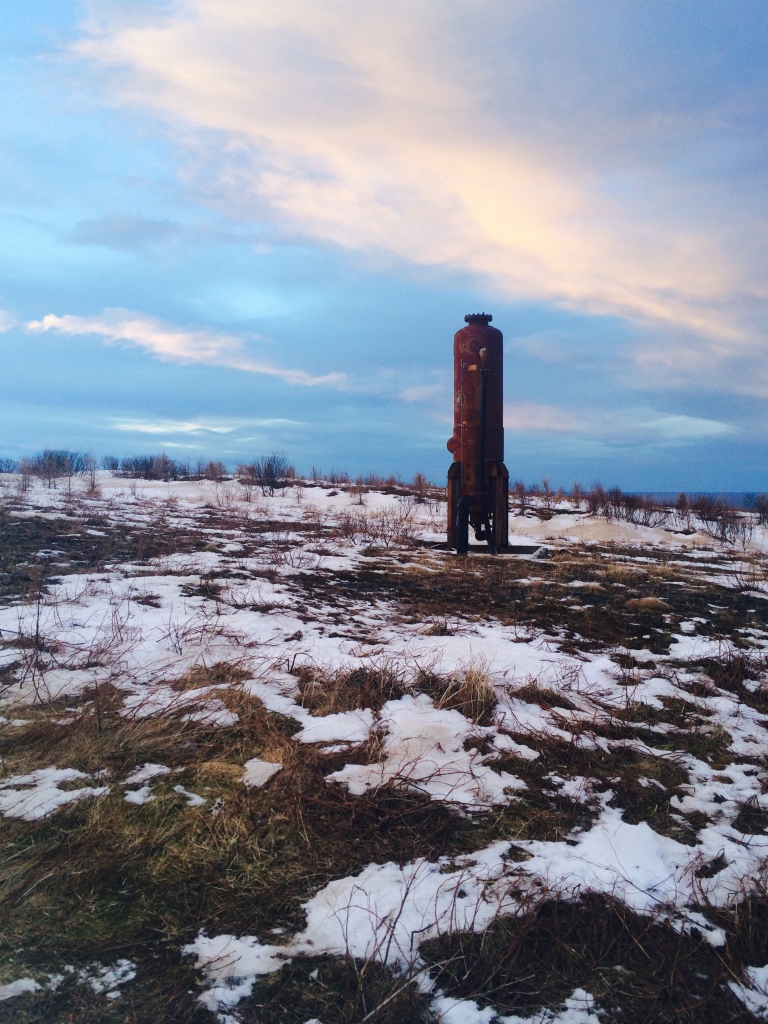 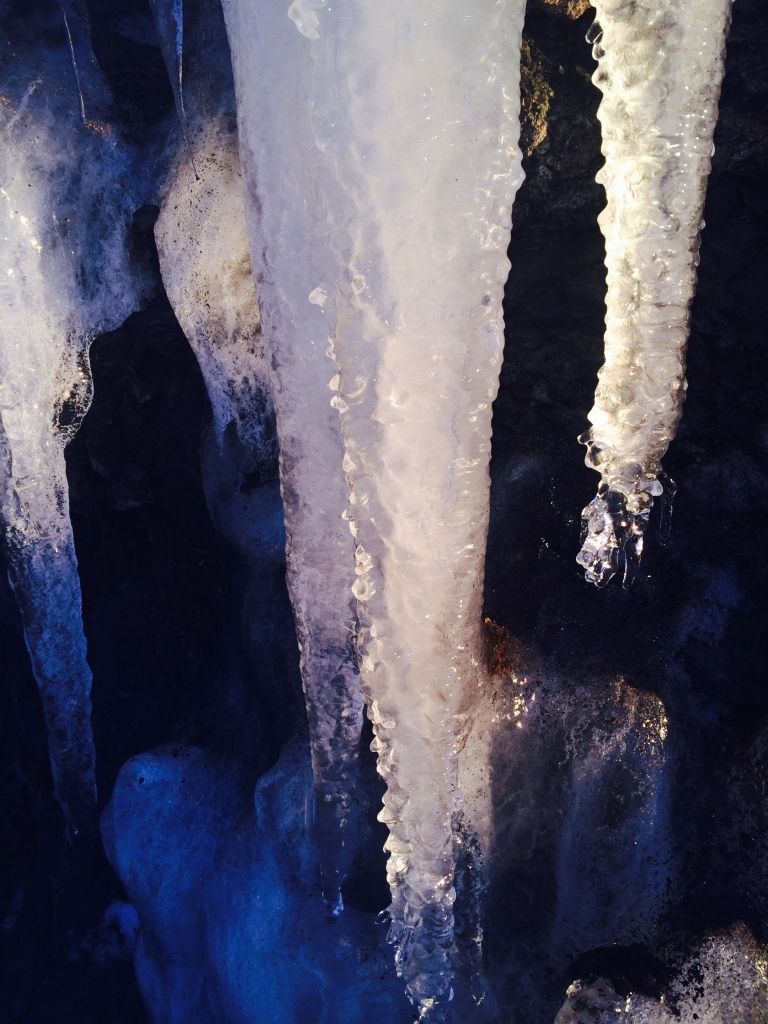 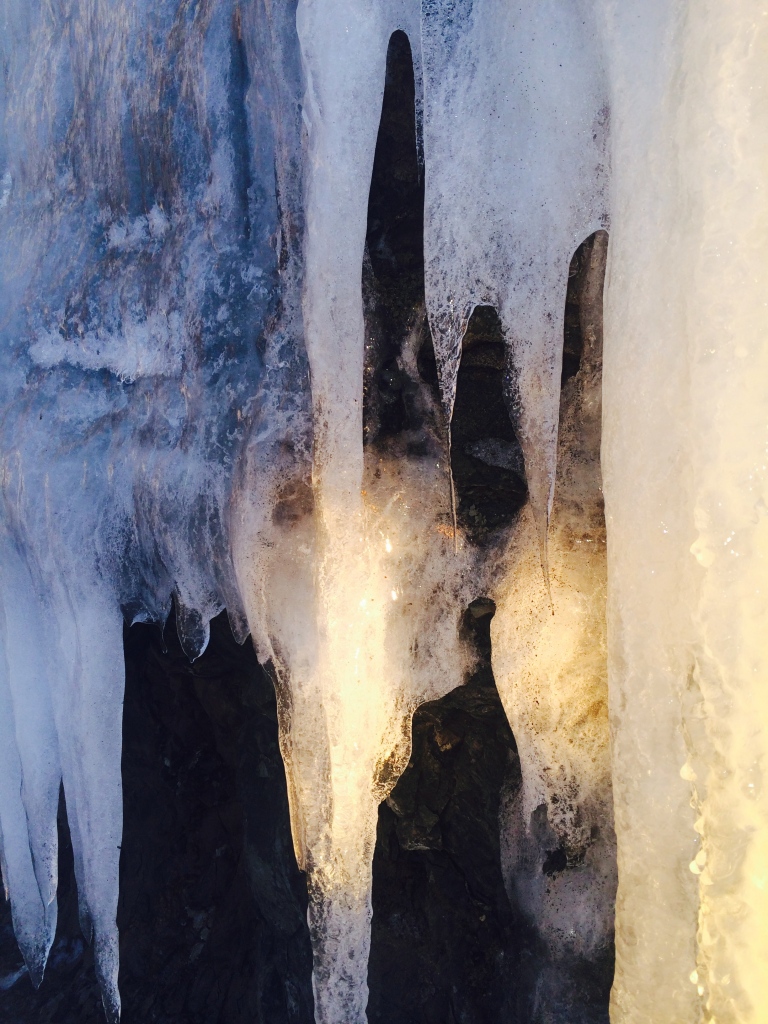 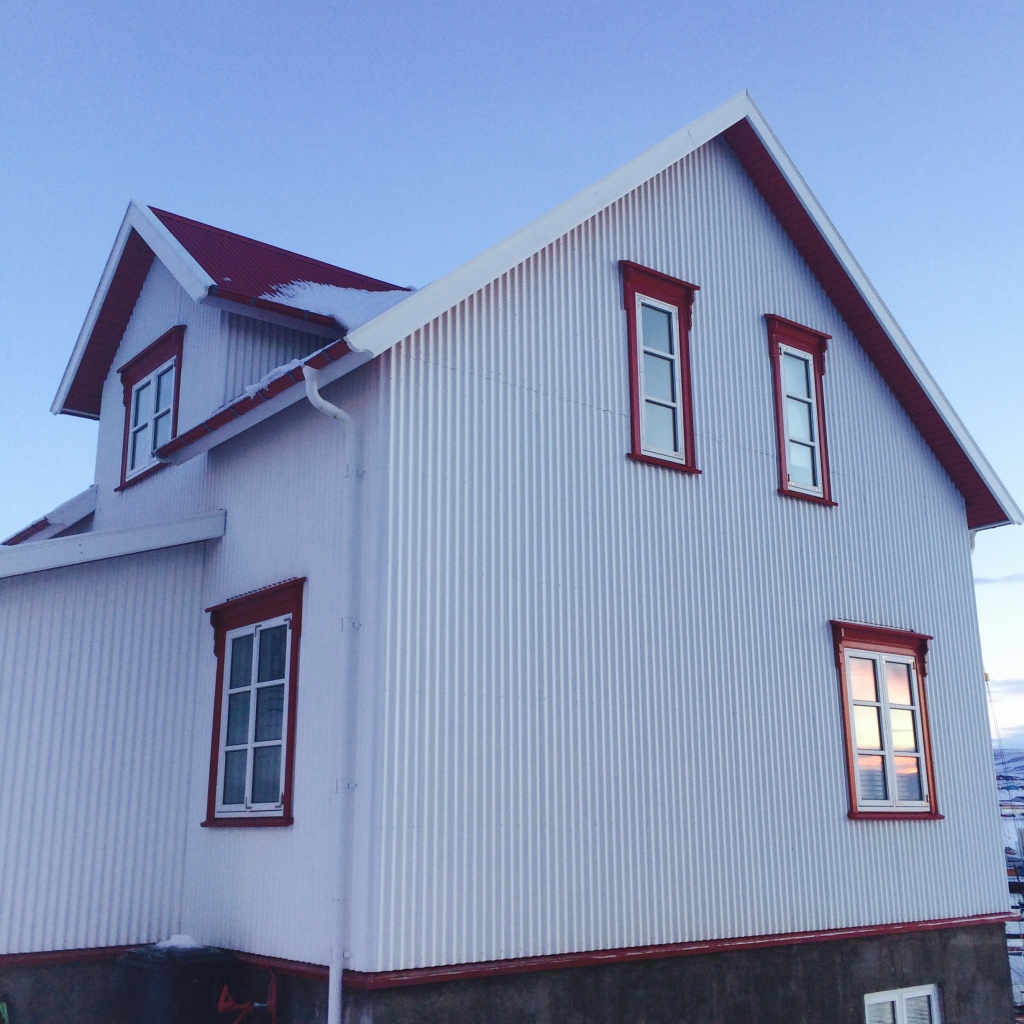 Photographs taken next to the yellow lighthouse, on my return trek. The light had changed dramatically by then. 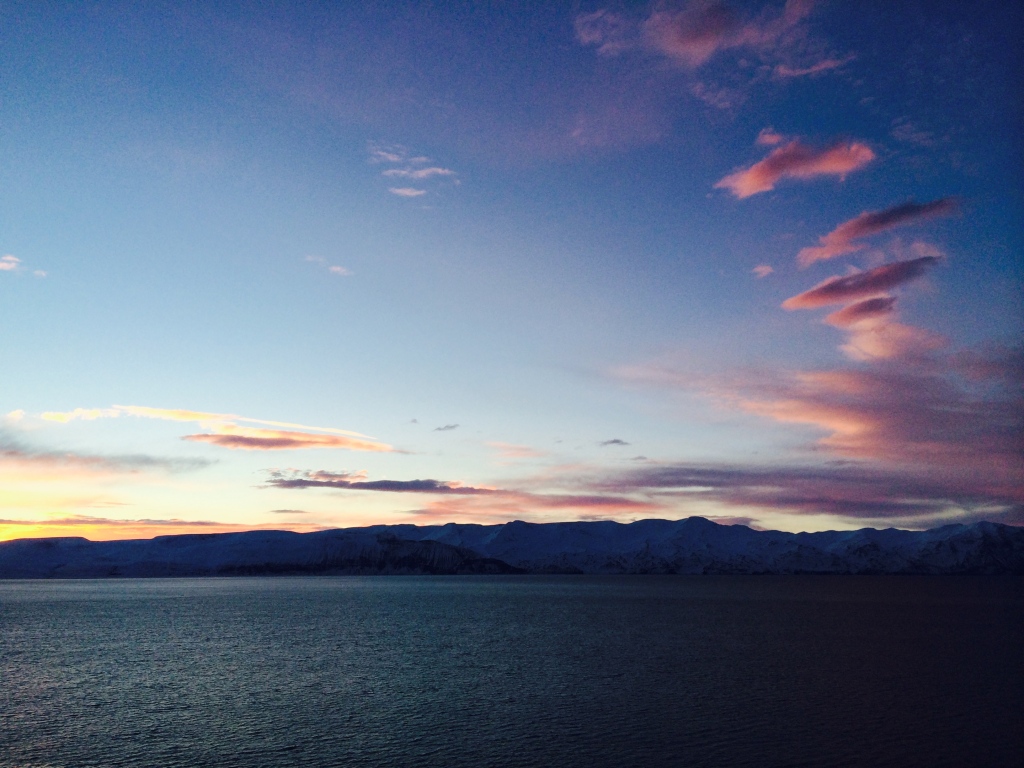 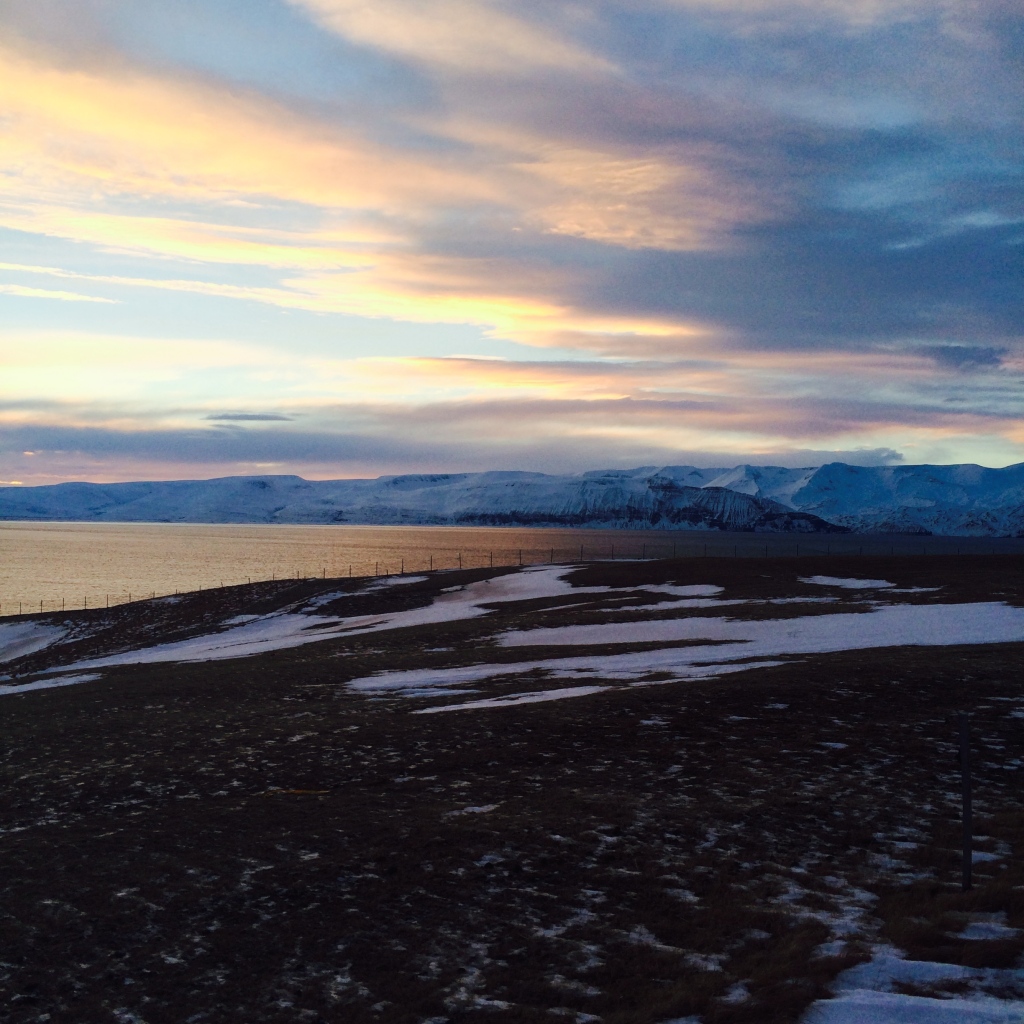 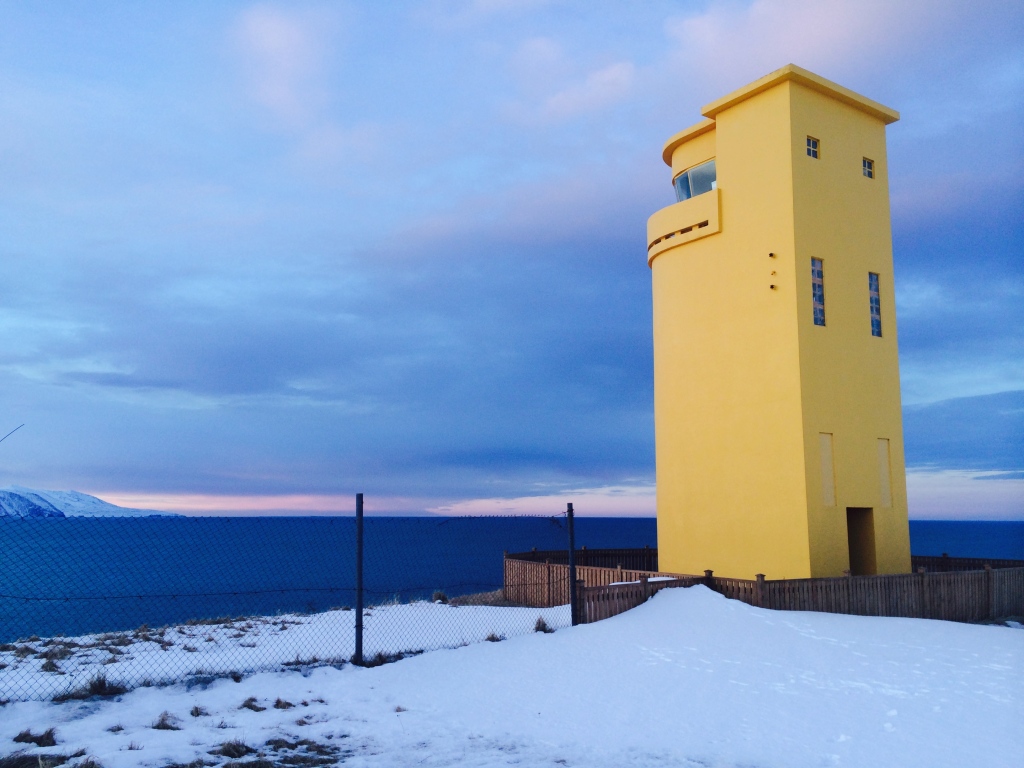 Lampposts in daylight: the afternoon view in Husavik. With good snowboots and crampons, walking in the snow is manageable. 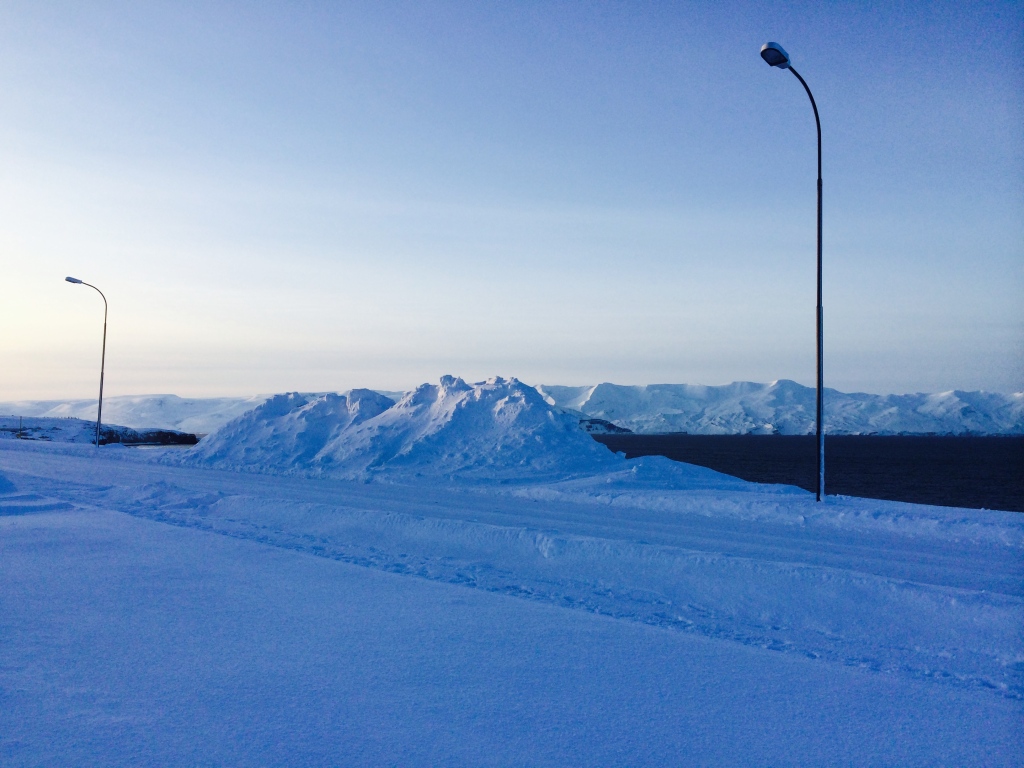 The brightest building in Husavik so far

An extraordinary coloured building in Husavik.

I have arrived in Husavik

I have finally arrived in Húsavik, after travelling from Akureyri by road. Many thanks to Marina for meeting me and for showing me the wonderful accommodation, and the fantastic studio spaces at Fjúk Art Centre (run on geothermal energy), including a huge former fridge studio space with a vault-like door. I enjoyed smoked fish for supper and am looking forward to spending the next month in this inspiring location.

The journey to Husavik in Iceland continues…

I am in Iceland and still en route to Husavik, my final destination on the north coast. I left London on Thursday 15 January in the morning and flew to Reykjavik’s international airport. I had planned to then take a domestic flight from Reykjavik to Husavik, but upon arrival at Reykjavik, I discovered that all flights to Husavik had been cancelled due to adverse weather conditions – and the next available flight would be on Sunday afternoon! My options were to stay put in Reykjavik for three days, or find another way of travelling to Husavik. I decided to keep going and managed to book a flight to Akureyri, a town in northern Iceland, which is a few hours drive away from Husavik. The one-hour flight was on a very small aircraft: there was a lot of turbulence on the journey, and I was relieved to land. I found a hotel for the night and today I shall continue my journey to Husavik by road. This photograph was taken upon arrival at Akureyri airport.

Zata Banks awarded an Artist Residency in Iceland in 2015

I am delighted to have been awarded an Artist Residency in Iceland in 2015. I am looking forward to spending 5 weeks in Iceland producing new creative work in the context of the Northern Lights, sulphuric volcanoes, boiling mud, and Europe’s most powerful waterfall.

FACT, in association with the University of Liverpool, PoetryFilm and The Poetry Society, is pleased to invite you to imagine the future of poetry at our symposium Send & Receive: Poetry, Film & Technology in the 21st Century.  With presentations from artists, scientists and thought leaders, the day examines innovative platforms involved in contemporary poetic practices.

Part of the Type Motion exhibition still running in FACT.

END_OF_DOCUMENT_TOKEN_TO_BE_REPLACED

I am looking forward to being a Guest Judge for this competition organised by Apples and Snakes, one of the UK’s leading poetry organisations.

Read Our Lips
Deadline 23 February
Open to poets living in the north of England, this competition from Apples and Snakes celebrates a DIY aesthetic with prizes offered to poets making their own film poems from storyboard to final cut. Awards go to best film, best first film and audience favourite. For rules and how to enter, click here: https://www.facebook.com/events/745493288879145/ 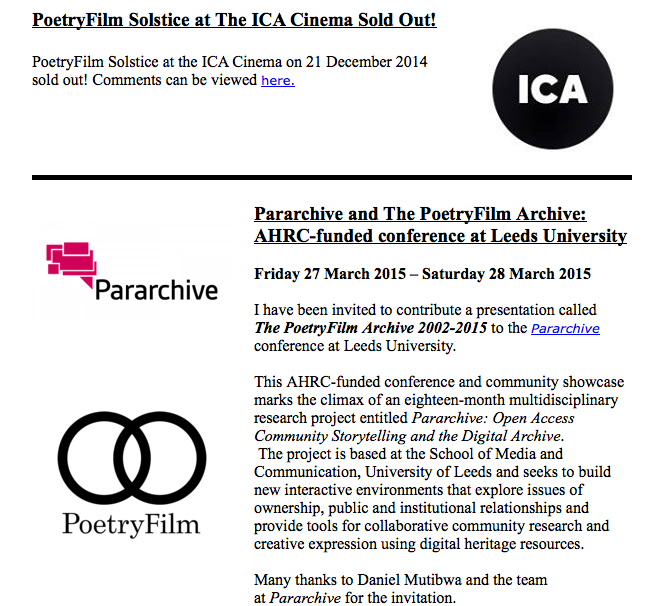