The event took place in a cinema at HOME in Manchester

END_OF_DOCUMENT_TOKEN_TO_BE_REPLACED

Many thanks to the BFI, Film London, and to Film Hub London for featuring PoetryFilm Paradox in the BFI LOVE highlights video! PoetryFilm presented 3 sold-out events in December 2015 at the Groucho Club and Hackney Picturehouse. Click to watch.

I’m delighted to be presenting a paper at the Seeing Sound symposium at Bath Spa University on 9-10 April 2016, featuring sound-informed artworks from the PoetryFilm Archive.

I am delighted to have been invited to judge this poem-film competition in Manchester on 29 March 2016. The press release is below.

The completed short films will be screened at HOME, Manchester’s premium arts centre, on 29 March with support from Manchester Literature Festival. An independent judging panel, including Zata Banks, poem-film maker and founder of the PoetryFilm project; poet and Senior Lecturer at the University of Manchester, Vona Groarke; and Michael Symmons Roberts, poet and Professor of Poetry at Manchester Metropolitan University, will choose their favourite film, with a £300 cash prize to be divided between the winning filmmaker and poet. The event will also include performances and live readings from an array of internationally-renowned poets, and a showcase of student film adaptations of Emeriti poets. The students were also given the challenge whist studying at Fujairah Women’s College Higher College of Technology. Cultural links are being made with Bokeh Yeah! and UAE, whilst Adele Myers is working out in Fujairah in the college.

END_OF_DOCUMENT_TOKEN_TO_BE_REPLACED

A curated selection of 14 short film artworks, chosen for their alignment with poetic structures and experiences, and with the visual, verbal and aural languages of poetry in various forms.

Parallax is the apparent displacement, or difference in the apparent position, of a visual object, when viewed along different lines of sight. In his book Transcritique, the Japanese philosopher Kojin Karatani uses the word ‘parallax’ to describe Kant’s shifting between contradictory perspectives. Kant’s Antinomies of Reason are contradictory propositions, which seem valid from their own perspectives, but which cannot be simultaneously true. Kant argues alternately from one perspective, then from the other, and Karatani describes Kant’s approach as establishing a parallax between philosophical positions. Karatani asserts that parallax does not equate with negativity, but it does not negate negativity either. The basis of parallax is the positivity of both positions.

Slavoj Žižek argues that in Karatani’s concept of the parallax view, the observed difference is not simply subjective, but that the viewer’s change in perspective reflects an ontological shift in the object itself; “the subject’s gaze is always-already inscribed into the perceived object itself, in the guise of its ‘blind spot’, that which is ‘in the object more than the object itself’, the point from which the object itself returns the gaze” (Žižek, The Parallax View, 2006). “Sure, the picture is in my eye, but me, I am also in the picture” (Jacques Lacan, The Four Fundamental Concepts of Psychoanalysis, 1979).

It Started With a Murder, Susan Young

Everything Makes Love with the Silence, Hernan Talavera

I’m delighted to be featured in this month’s Visual Verse: Online Anthology of Art and Words. The image on the left is by Alejandro Carol and my response, Anosmia, is on the right. 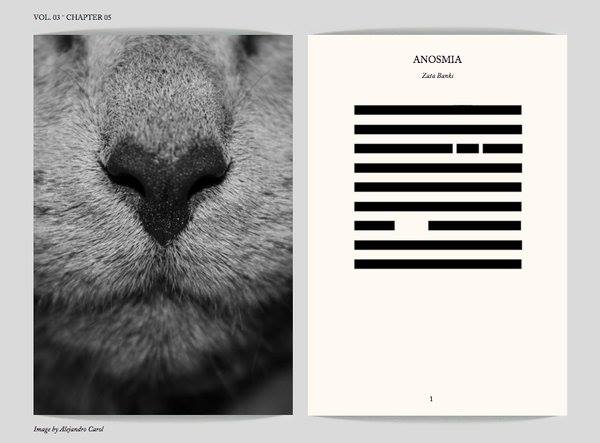