Thanks to Millfield School for inviting me to deliver a presentation about PoetryFilm, with film clips, to Art&Design, Literature, and Media Studies sixth form students on Thursday. Thanks to all the staff and students for a wonderful evening, including some great questions. It was a flying visit before catching the last train back to London!

Sinestesia: screening in Barcelona, 7 May 2016

My films Full Stop and Palindrome will be screened at Sinestesia on 7 May 2016 in Barcelona. Full details below.

The press release for the Data Editions Season Two commissions, including a Poetry section, is below.

Tracey Emin, Jake Chapman, Jacolby Satterwhite, Casey Jane Ellison, and Rashaad Newsome have been announced amongst the leading international artists commissioned for Season Two of Daata Editions, an innovative online platform for the sale of easily downloadable commissioned artist video, sound, web and poetry art editions. The first set of editions will be released to coincide with the opening of NADA and Frieze New York on 5 May 2016, with works available online from $100. Season Two commissions will also be exhibited at Daata Edition’s interactive NADA booth.

Daata Editions was developed to enable audiences to view contemporary artists who are working in digital mediums, showing artworks made for, and therefore best viewable on laptops, iPads, iPhones, screens and even cinemas. This new and innovative way to download and collect art is designed specifically to be a native platform to a new generation of artists who work with moving image and sound, and to empower artists, audiences and the marketplace in an area of artistic practice that remains underrepresented within traditional art market models.

On 5 May 2016 the first set of Season Two artist commissions will be released online. Tracey Emin, Jacolby Satterwhite, Michael Manning and Rashaad Newsome will each present a series of six works. Leading British artist Tracey Emin is known for her varied practice that draws inspiration from events in her life and explores self-representation and the feminist discourse. For her Daata Editions commission Emin has produced a new series of highly personal poetry works for the new Poetry section of the website, which explore how sound can express essential emotions.

In his new series of work for the Video section, multidisciplinary American artist Jacolby Satterwhite explores blockbuster movie tropes, disaster films and queer eroticism in a futuristic suite of films En Plein Air Abstraction (2016), featuring floating mechanics gliding over sci-fi inspired global disaster zones. Using the internet as his medium, LA-based Michael Manning has produced a series of video works called Activity Playlist that take their conceptual basis and form from playlists created by streaming services such as Spotify, seeking to give visual form to the themes and moods presented in their musical playlist counterparts. Rashaad Newsome’s work examines the visual language of power and status, sampling heavily from hip-hop and pop culture.

END_OF_DOCUMENT_TOKEN_TO_BE_REPLACED

Click below to see the event booklet featuring all the abstracts and the full programme. The Seeing Sound symposium took place at Bath Spa University on 9-10 April 2016.

END_OF_DOCUMENT_TOKEN_TO_BE_REPLACED 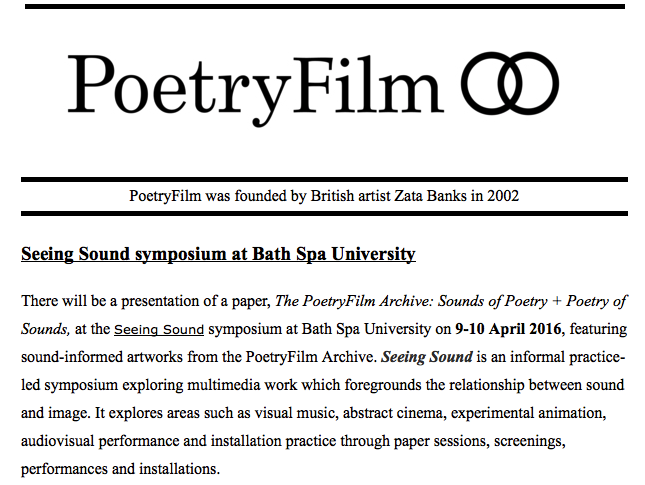 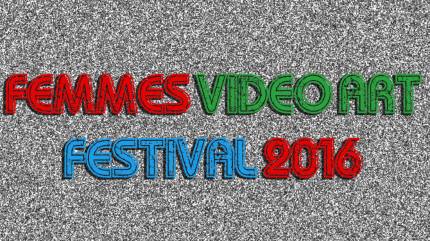 Delighted to hear that my poetry films Full Stop and PoetryFilm Blackboard have been selected to be screened at LACE (Los Angeles Contemporary Exhibitions) and at the Femmes Video Art Festival 2016 at The Situation Room gallery (LA). Screenings between 6-30 April 2016. Thanks to curator Micol Hebron.

Full Stop features a poem communicated in Morse Code, and PoetryFilm Blackboard was a participatory co-creation poetry project commissioned by Southbank Centre in 2014.

The full programmes are below.

END_OF_DOCUMENT_TOKEN_TO_BE_REPLACED

PoetryFilm has partnered with the Backup Festival in Weimar, Germany, in association with Poetryfilmkanal journal. A programme will be presented in Weimar on 20 May 2016 as part of the festival.