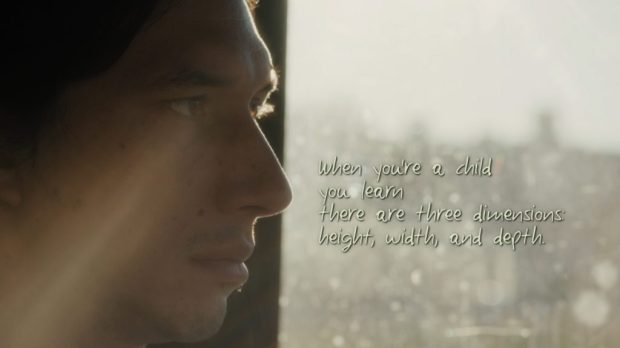 Another One
Ron Padgett
When you’re a child
you learn
there are three dimensions:
height, width, and depth.
Like a shoebox.
Then later you hear
there’s a fourth dimension:
time.
Hmm.
Then some say
there can be five, six, seven…
I knock off work,
have a beer
at the bar.
I look down at the glass
and feel glad.

*article below written by Elizabeth Flock for PBS Artbeat

This poem is one of four that American poet Ron Padgett wrote specifically for the new Jim Jarmusch film “Paterson,” which follows a poetry-writing bus driver (played by Adam Driver) who shares a name with his city of Paterson, New Jersey. Throughout the film, we both see and hear Paterson recite his poetry, inspired by his daily routine.

When Jarmusch asked Padgett, a friend, to write original poetry for the film, Padgett initially said no. But after talking it over with Jarmusch, Padgett told the PBS NewsHour,“I thought … why do I have to be such a chicken? Why can’t I just really accept this challenge?”

After the poet read the script, he said he began to form an idea about who the character of Paterson was, and “found myself falling into what I kind of temporarily fantasized to be his world.”

Paterson’s world is full of routines: he drives his bus, writes poetry at lunch, sees his wife at home at night and then goes to have a beer at the local bar. So goes the poetry Padgett has written for him in the film: “I knock off work, / have a beer / at the bar. I look down at the glass / and feel glad.”

Padgett, known for this kind of plain, observational writing, said young people too often have a narrow or inflated view of what poetry has to look like. For Padgett, poetry can simply come, as it does in the film, from the familiar — or the imagined.  “Maybe a film like Paterson will help some people say, huh, maybe I could write something like this too,” Padgett said.