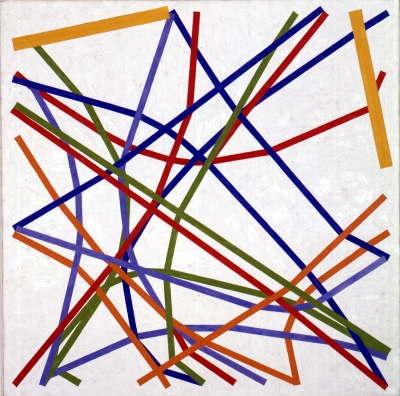 Automatic Art is the latest show at GV Art. The exhibition presents 50 years of British art that is generated from strict procedures. The artists make their work by following rules or by writing computer programs. They range from system-based paintings and drawings to evolving computer generated images.

The full press release from GV Art is below.

“The technique of any art consists of a language and a logic” – Paul Cézanne.

An artist’s “language” consists of many elements – colours, lines, shapes. The “logic” is the set of rules developed by the artist for selecting those elements and putting them together.

Over the last 50 years British artists have been pioneering Systems Art and Computer Art. These artists create artworks using personal rules or by writing computer programs that generate visual forms. The artworks in the exhibition range from paintings and drawings to computer-based displays that evolve dynamically through time. All of them use some form of organised static or changing structure. The art may be abstract but it is full of life.

• The exhibition provides a survey of 50 years of British art that uses the structures of language and logic, including members of the Systems Group from the 1970s and current Computer Artists.
• The artists showing in the exhibition use rules or algorithms in making their artworks.
• The exhibition has strong connections with De Montfort University, previously Leicester Polytechnic, where many of the artists have worked or studied.

By 1969 Ernest Edmonds (curator of the show) was already writing computer programs as part of his art, first using the single mainframe computer that Leicester Polytechnic owned at that time.

The Arts Council exhibition ‘Systems’ toured in 1972-3 and included Jeffrey Steele, Malcolm Hughes, Peter Lowe and Michael Kidner. None of these artists wrote computer programs, but their art was a strong influence on those who did. Also in the early 1970s Harold Cohen, already a highly respected artist, started his lifelong quest of writing and developing his computer program ‘Aaron’ that automatically produced drawings and paintings, most recently in partnership with the artist himself.

In 1973 Malcolm Hughes established the Experimental Department at the Slade, where he installed a computer. Artists who studied there are in this exhibition: Paul Brown, Stephen Bell, Stephen Scrivener and Dominic Boreham. Several of these went on to Leicester Polytechnic, now De Montfort University (DMU), where Systems Artists, Colin Jones and Susan Tebby taught, as did Ernest Edmonds.

The Systems and the Computer artists overlap and have many connections – writing computer programs is an extension of the Systems approach and one that provides new opportunities afforded by the technology itself. Paul Brown, William Latham and the collaboration ‘boredomresearch’ are inspired by models of growth in natural forms. Sean Clark and Ernest Edmonds explore time-based dynamic and interactive forms.